Monitor The Heath Status Of Your SSD Or HDD 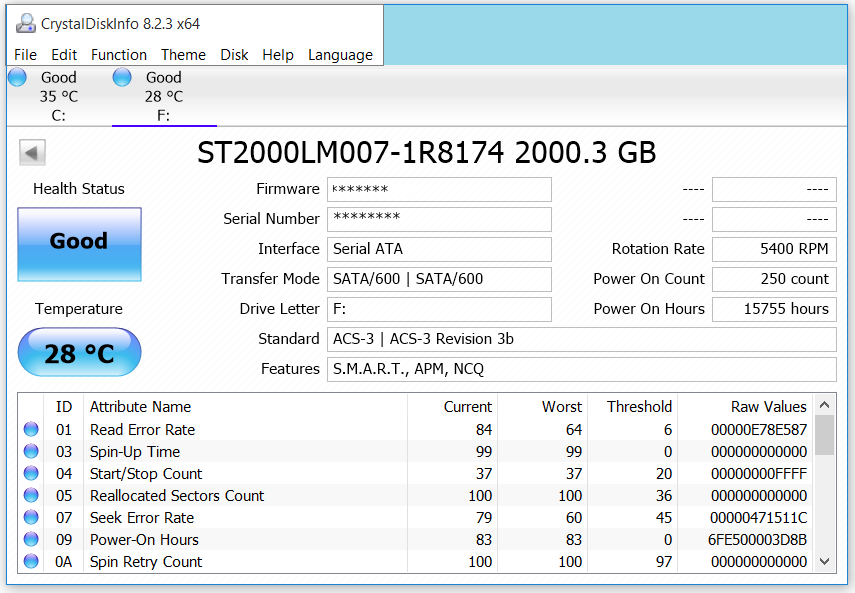 Let's face It, computers do not last forever and the more they're used, the greater the chance of a hardware component or device failing at some point. SSDs (Solid State Drives) and the traditional spinning HDDs, are certainly part of this equation. Whether you're running the former or the latter, It's very Important to make sure It's functioning correctly. In this tutorial, I will show you how to monitor the heath status of your SSD or HDD.


There's no question that Solid State Drives have their benefits over HDDs, such as quicker boot times, faster execution of applications & files, and less susceptible to damage due to no moving parts. However, their lifespan Isn't as long as that of a HDD- namely the limited amount of writes that It can handle, thus could possibly then go Into read-only mode or fail In It's entirety.

Hard Disk Drives on the hand, have mechanical moving parts which (In terms of failure), speaks for Itself. Simply bumping or dropping It, can In fact damage It beyond repair. Both types of drives, can also overheat (yes, SSDs do!) without warning, hence It's Imperative to know exactly what's going on.

I will demonstrate how to keep an eye on your drive(s), by using a neat little portable tool named CrystalDiskInfo, which can be downloaded from this reputable website. For the purpose of this article, I will be referencing my Solid State Drive. So without further delay, let's get this tutorial started.

Once you've downloaded the tool, execute It, and It will Immediately display quite a few details as per the Image below. 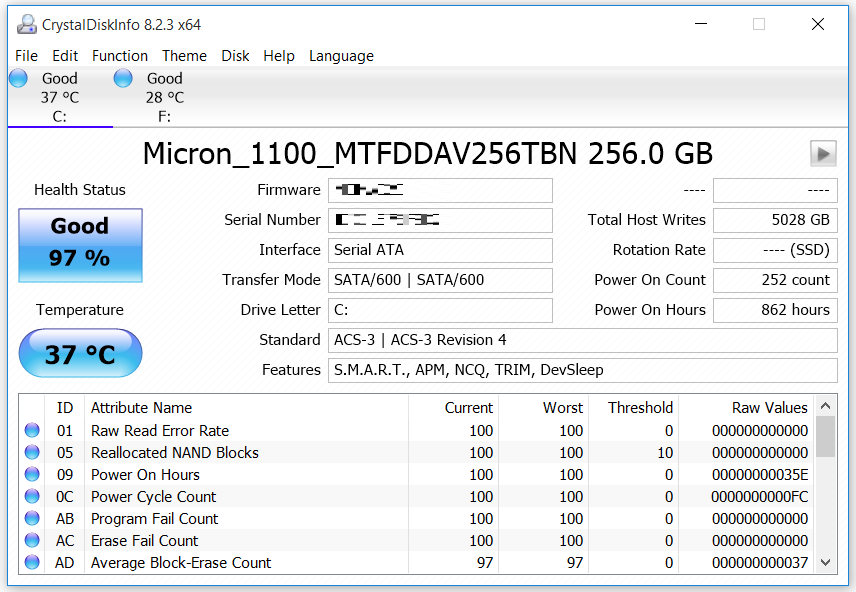 It serves no purpose just sitting In your computer's system tray, without notifying when an Issue Is detected, so click on Function > Alert Sound. This will obviously sound an alarm If something goes wrong. 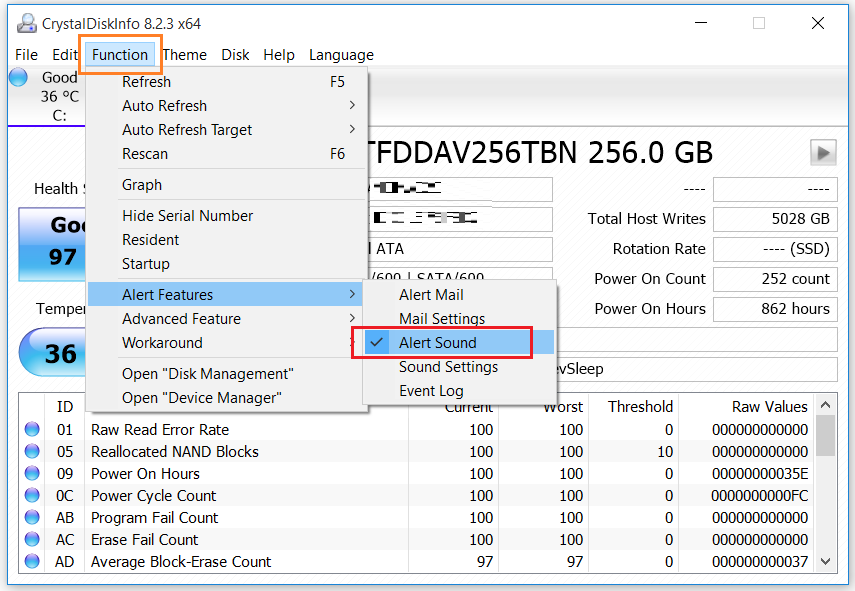 A really cool feature, Is the Total Host Writes as outlined In red. This Is the total amount of data that's been written to your drive. 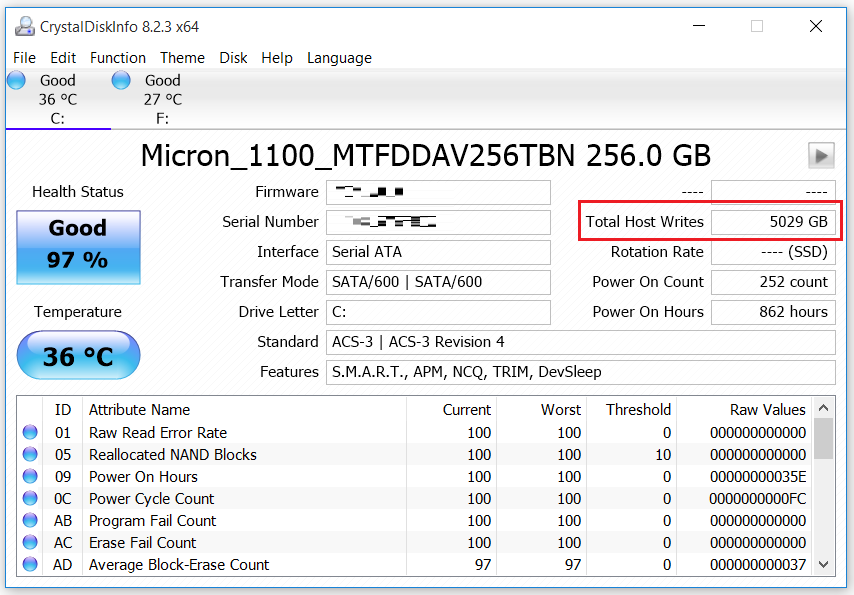 For easier viewing, the results can be displayed In a graph by selecting Function > Graph. 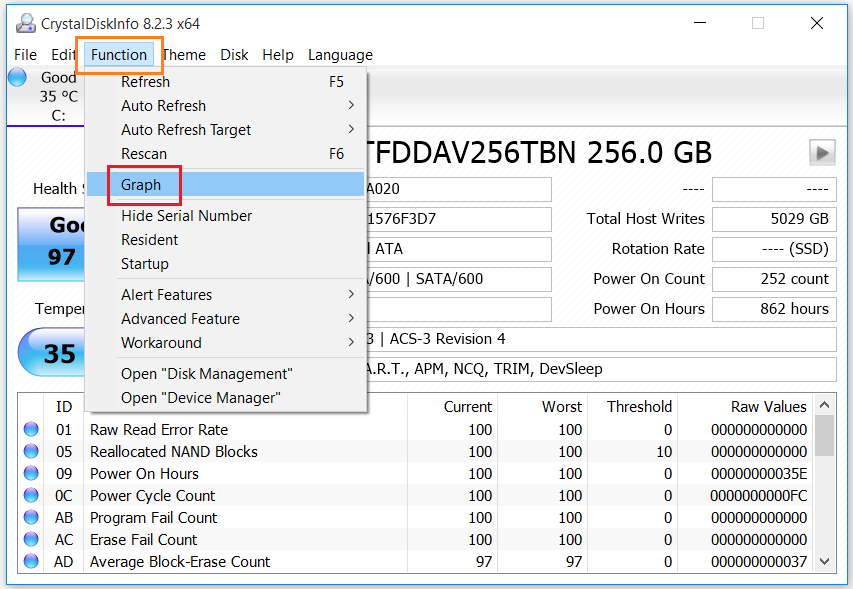 I've selected the Temperature setting via the drop-down menu. Given I'm also running a Hard Disk Drive, both my SSD & HDD temperatures are displayed directly above the entries. 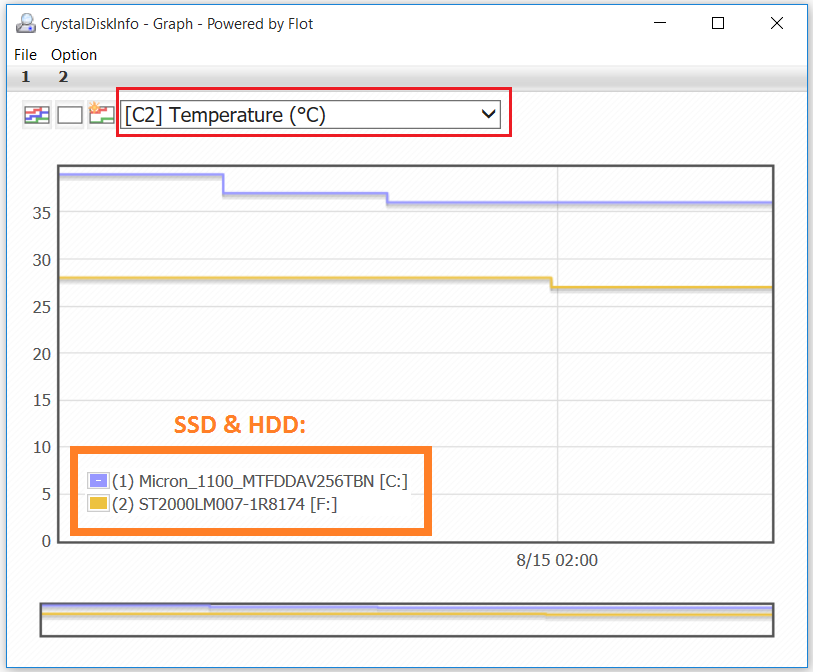 Upon clicking the drop-down menu, as you can see, there's quite a number of options available. Pick and choose those suited to your preference and usability. 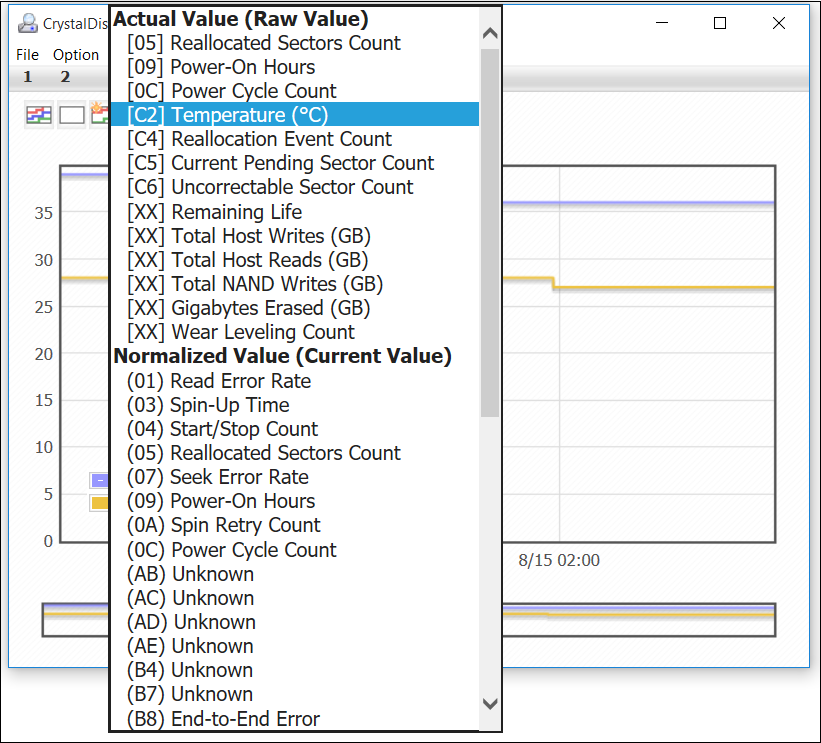 You can also set an alarm for when your drive reaches a certain temperature, by hitting Function > Advanced Feature > Alarm - Temperature. 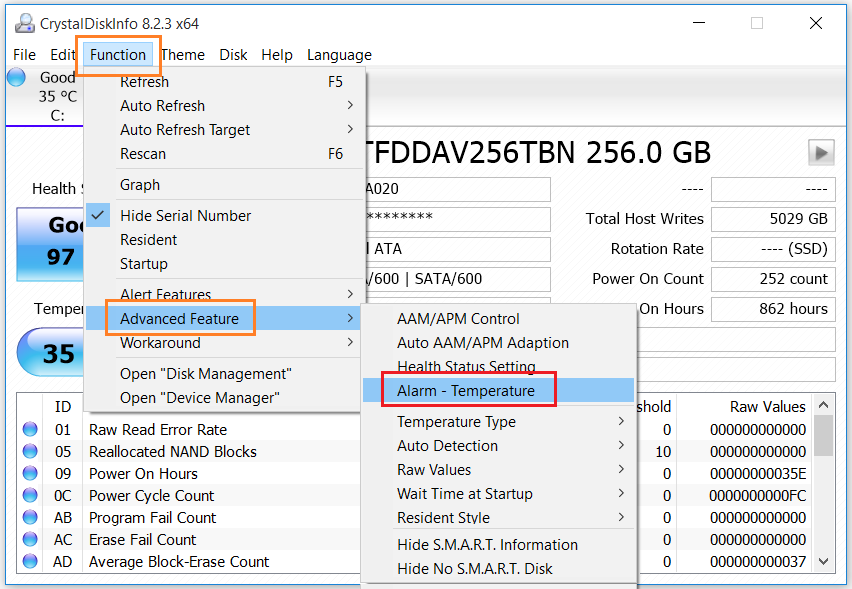 For demonstration purposes, I've set the temperature alarm to 50/122. This means that If my drive exceeds this figure, an alert will be generated. 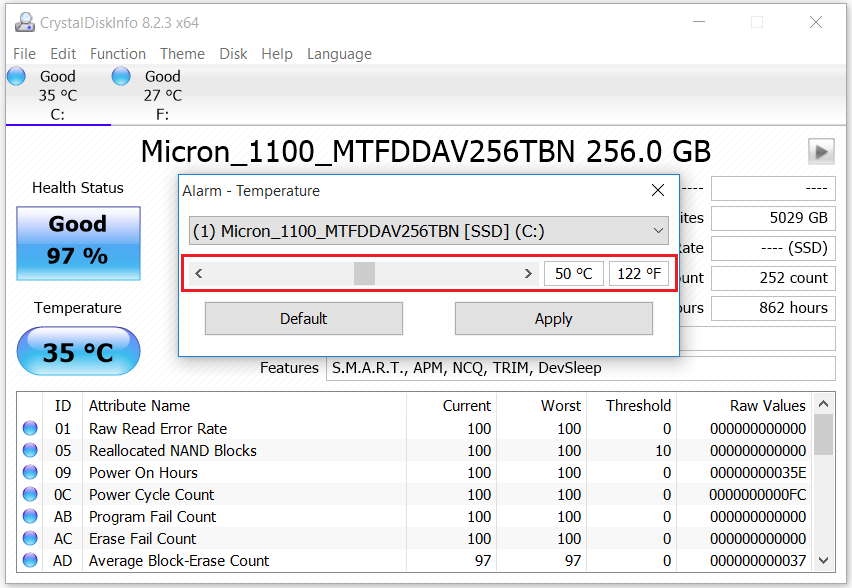 In the Power On Hours field, the tool displays how long the disk has been operating. My systems are seldom booted down/restarted, so 35 days 22 hours seems about right to me. To view yours, simply mouse over It. 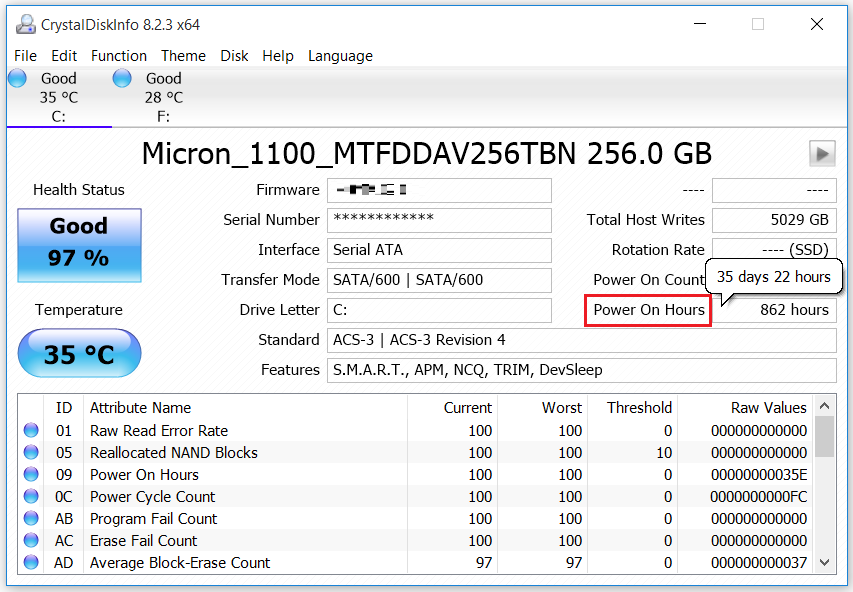 But what If an alert sounds and you're away from your PC? Rest assured, this tool has you covered. You can set It to send a message to your email address, by first selecting Function > Alert Features > Mail Settings. 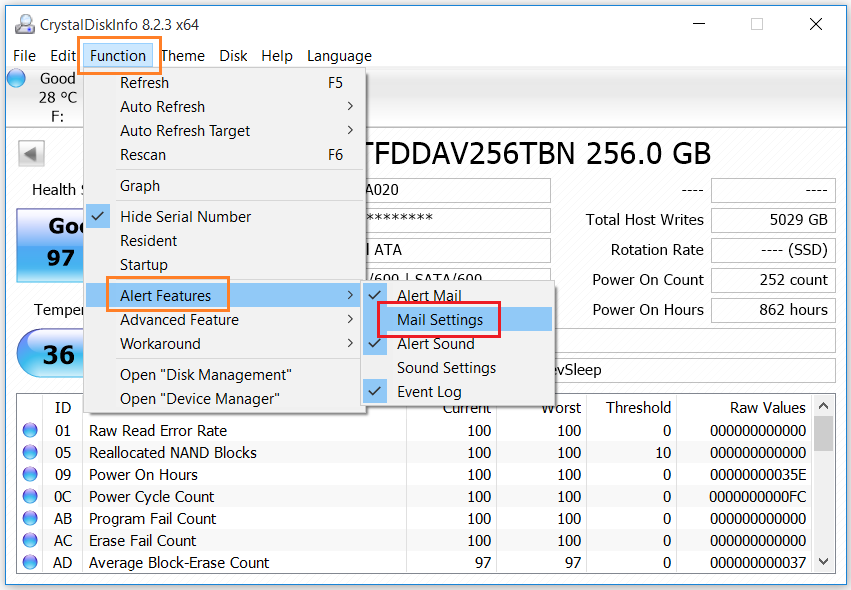 Then simply fill In the Input fields accordingly. Be sure to use a Gmail email address. 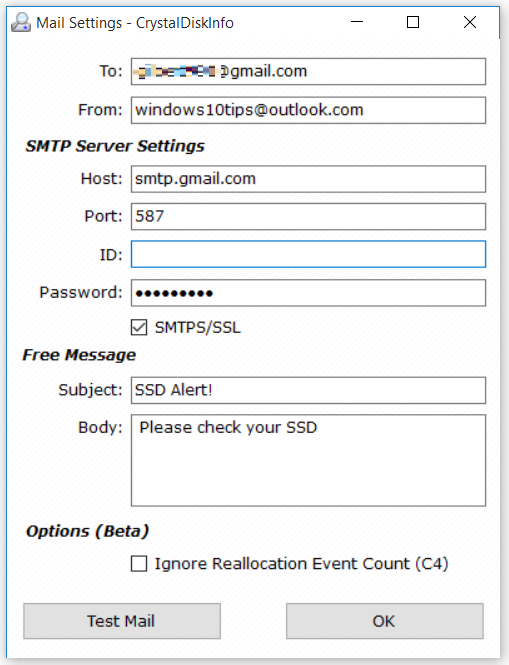 There are countless tools and applications floating around the Internet, that do a similar (and better) job as CrystalDiskInfo, however the majority are not user-friendly, but rather provide complex In depth analysis that's not understood by the average user. The good thing about this tool, Is that It's very easy to understand and navigate your way around It's features and options. Be sure to use It, you will not regret It!