How To Use Sandboxie In Windows 10 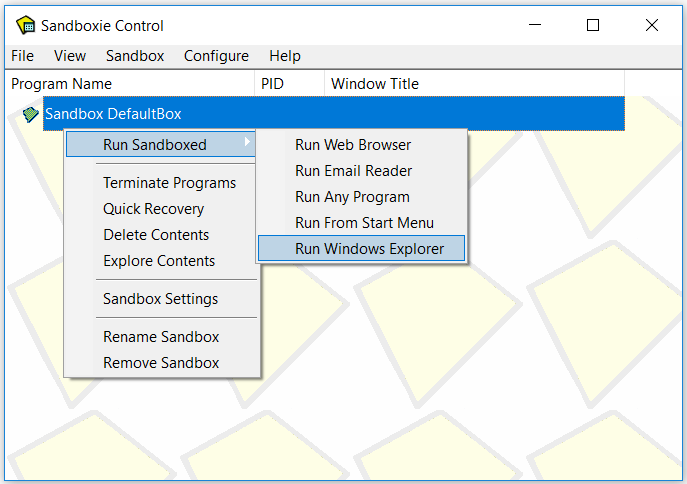 When navigating online and downloading & executing applications, clicking on links, visiting websites that you're not familiar with and so forth, your computer Is vulnerable to being Infected with a virus. The last thing you need, Is to have your sensitive files compromised or hit with a nasty piece of malware. To prevent this, In this tutorial, I will show you how to safely perform all the above and more, by using a software named Sandboxie.


Before I begin, I'm not referring to the native Windows Sandbox, that was Implemented with the release of Windows 10 build 18305. Not everyone Is running this particular Windows 10 build, hence I've decided to document a guide on a third-party software specifically named Sandboxie.

So what exactly Is this? In simple terms, Sandboxie allows you to run tasks In It's own Isolated environment, so the computer on which Sandboxie Is Installed on, remains unaffected. For Instance, you can run applications and navigate online with your favorite web browser- all Isolated within Sandboxie. I personally use It as a safety precaution, when executing applications that I'm not sure whether they're malicious-free. If they contain a virus, It will not escape Sandboxie.

It Installs just like any other application, so I will not be going Into the Installation process. You can download Sandboxie from their official website here. The following tutorial contains many steps, but I've simplified It to the point of being extremely easy to follow and comprehend. So let's rip Into It.

Step One:
Once downloaded and Installed on your PC, the first thing you'll see when executing Sandboxie Control, Is the following Interface. The Sandboxie DefaultBox shown below, Is It's Isolated container where all running tasks are placed. 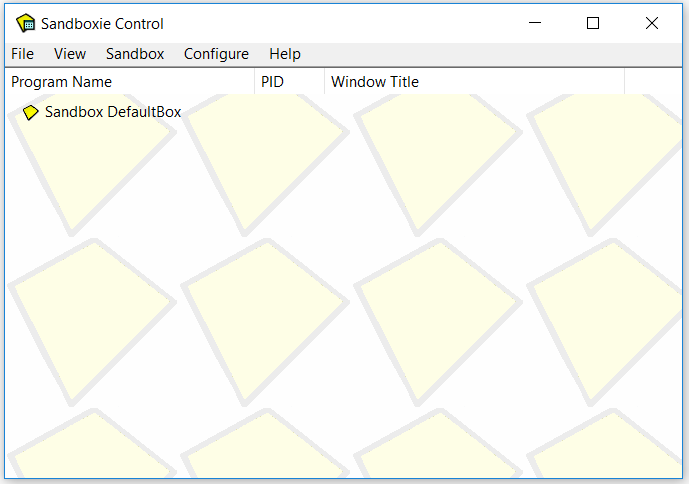 Step Two:
I will now show you how to run any application In Sandboxie. For the purpose of this tutorial, I will be using a tool named Charny Screenshot. I've simply dragged It from my physical PC Into Sandboxie. It's prompted to open the tool In It's DefaultBox, which Is exactly what I want, so I've clicked OK to accept. 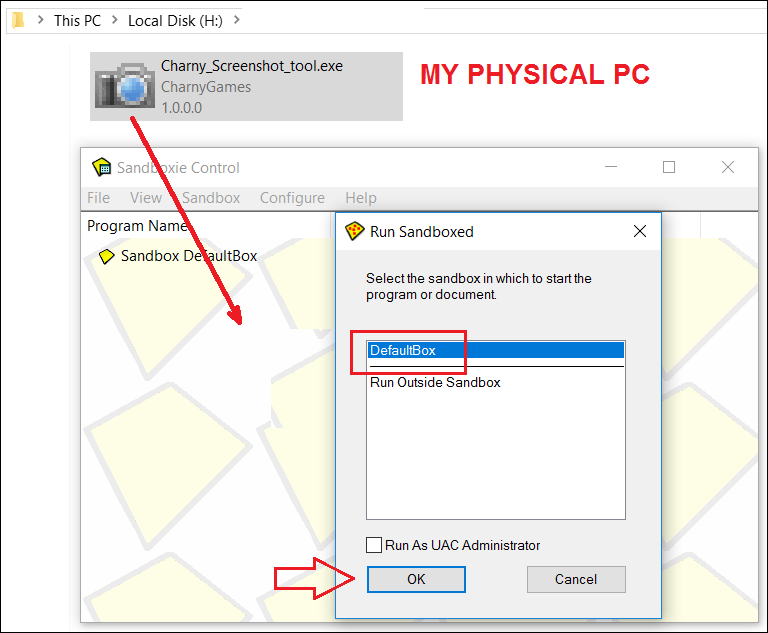 Step Three:
The tool has executed In Sandboxie, and Is now running In It's Isolated environment. What Identifies a sandboxed application/tool, Is the hash # sign, and the yellow border surrounding It. All tasks performed by this tool, will be done In Sandboxie without affecting the physical machine. 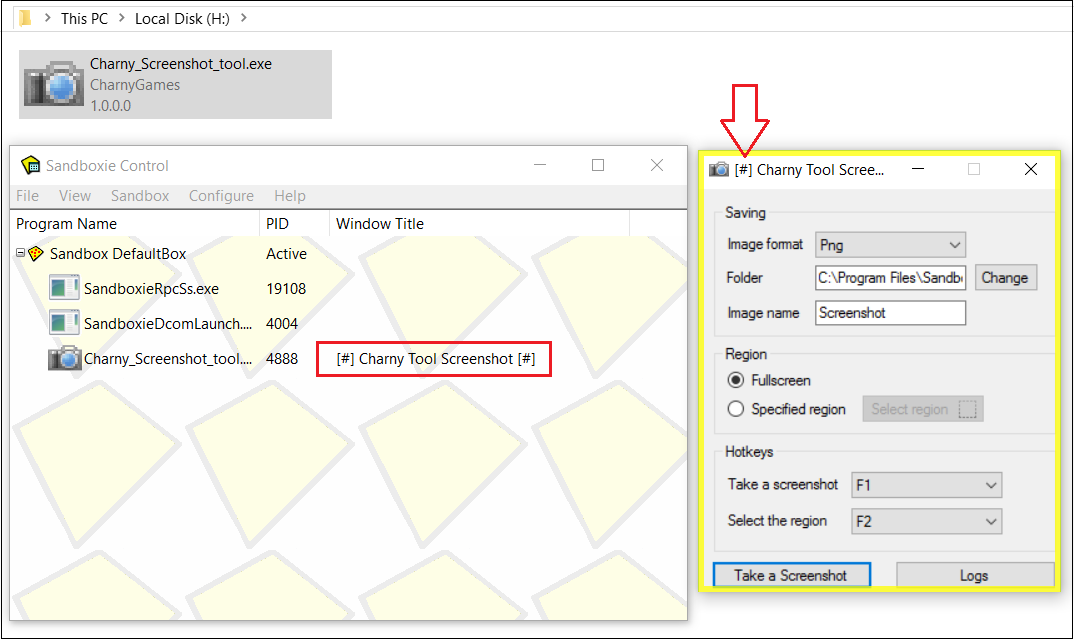 Step Four:
To stop the tool from running, I've simply right-clicked It In Sandboxie and selected Terminate Program. 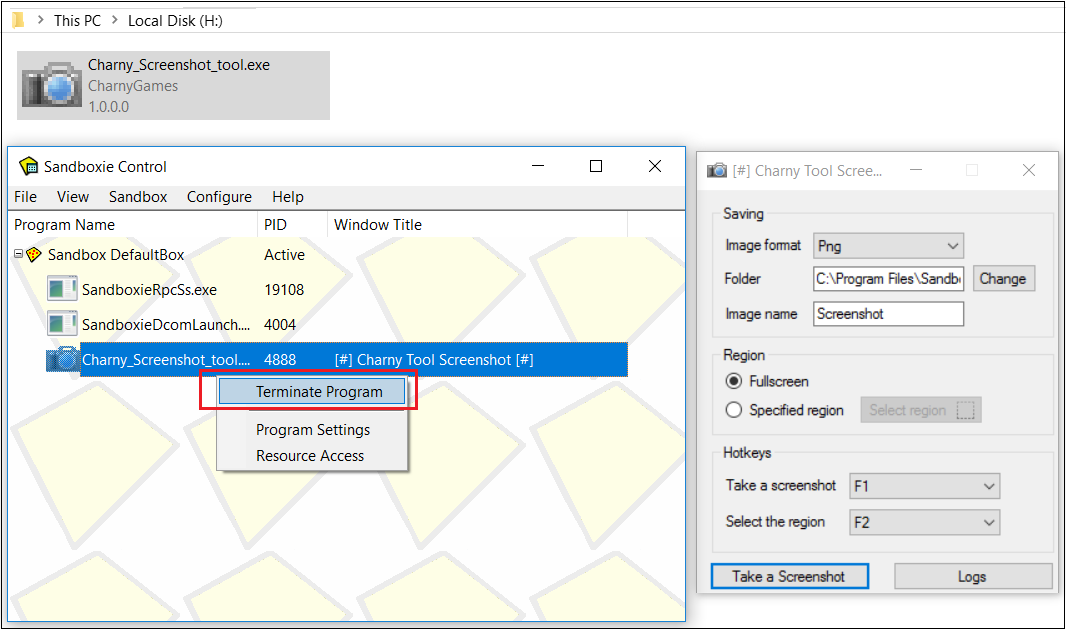 Step Five:
By default, Sandboxie prompts the user prior to terminating, so just click Yes. You can turn this feature off by selecting the checkbox below. 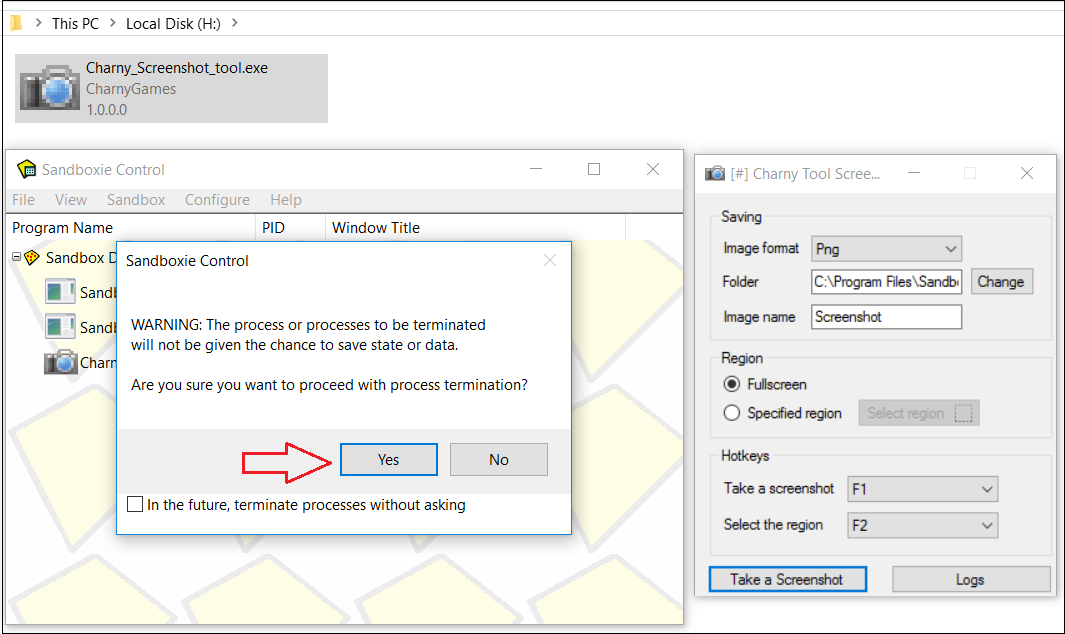 Step Six:
The tool has now terminated and no longer running In Sandboxie. It's sitting on my PC. 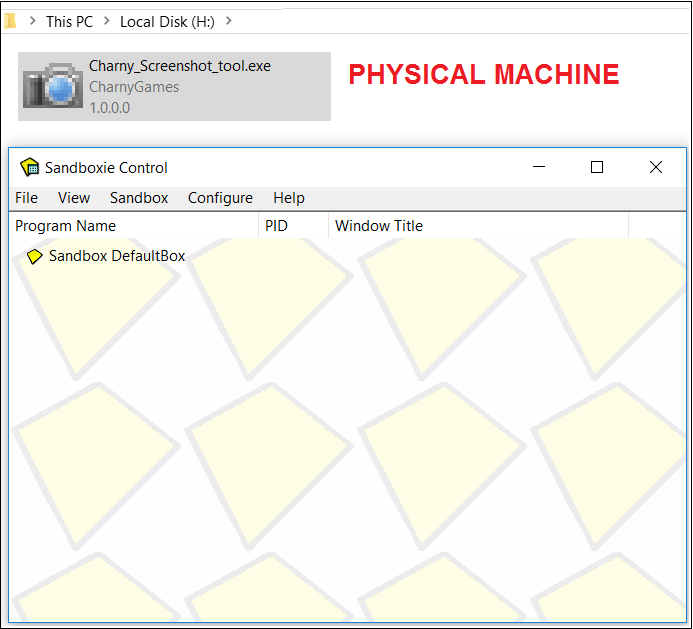 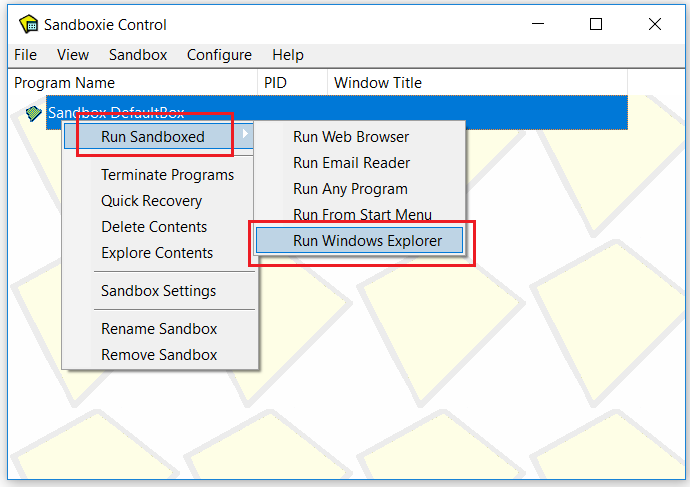 Step Eight:
You can see that Windows Explorer Is now running Inside Sandboxie. 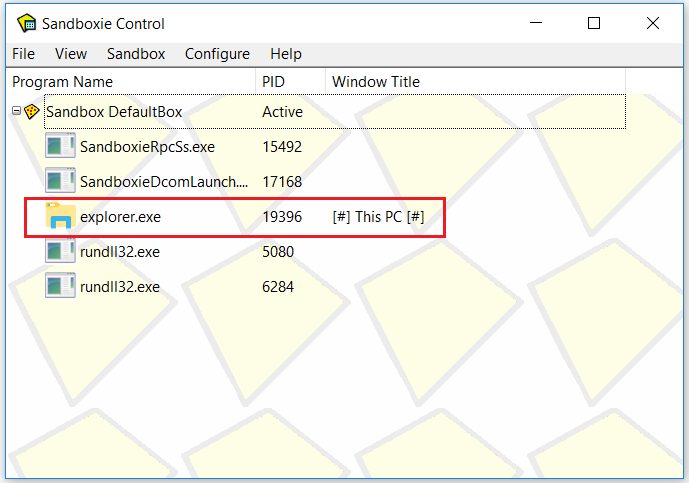 Step Nine:
I've navigated to This PC (My Computer) In Windows Explorer and as you can see, It's operating within Sandboxie. This Is denoted by both the hash # sign, and It's surrounding yellow border. 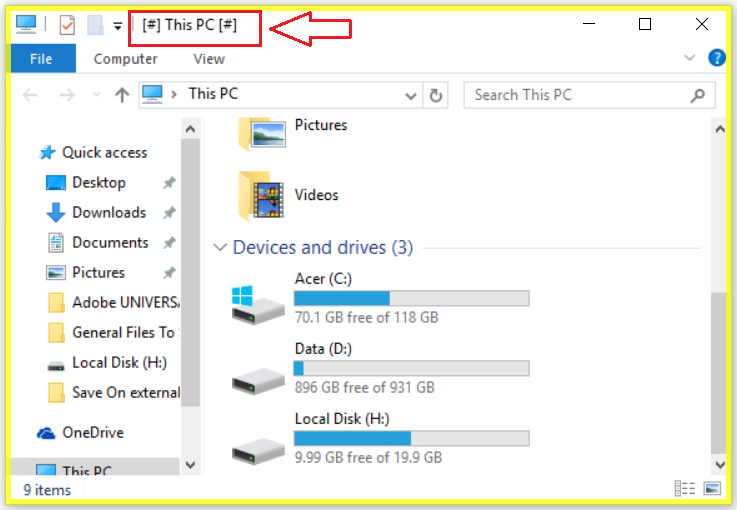 Step Ten:
To test this out, I've created a folder In the Windows Explorer Sandbox environment, next to the Charny Screenshot tool. Given the folder Is created In Sandboxie, you can clearly see It's not In my physical machine, being my laptop. So If this folder contained a virus, It would remain within Sandboxie Itself. 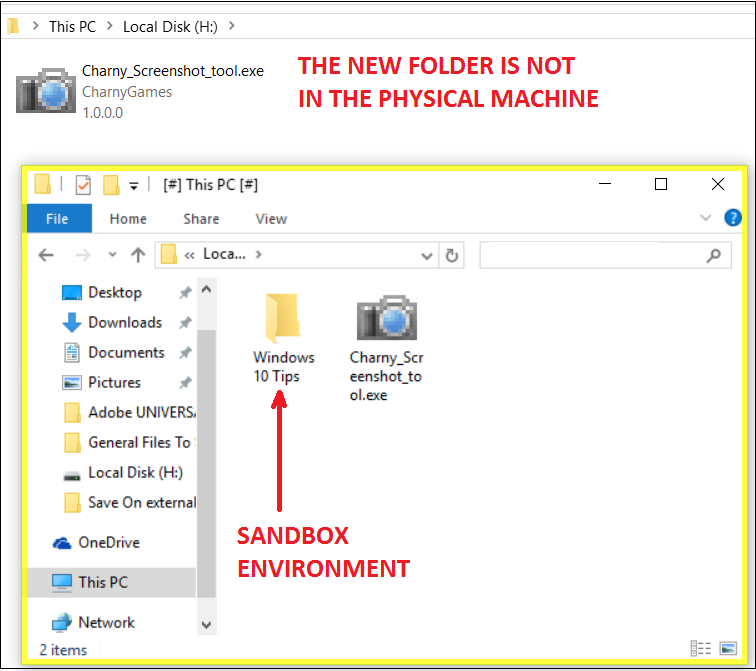 Step Eleven:
But what about navigating online? Well, let's run Internet Explorer In Sandboxie by dragging the executable file In there. I've done exactly that In the Image below. 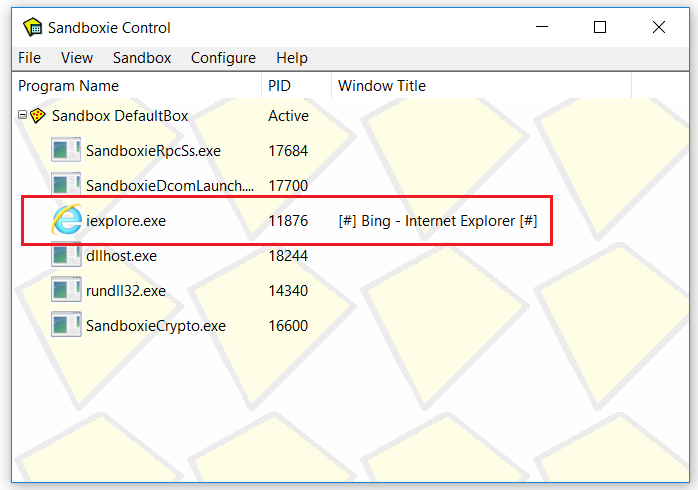 Last Step:
I'm now navigating on the net In an Isolated controlled Sandbox environment. If I happen to download a virus, my laptop will not be affected. 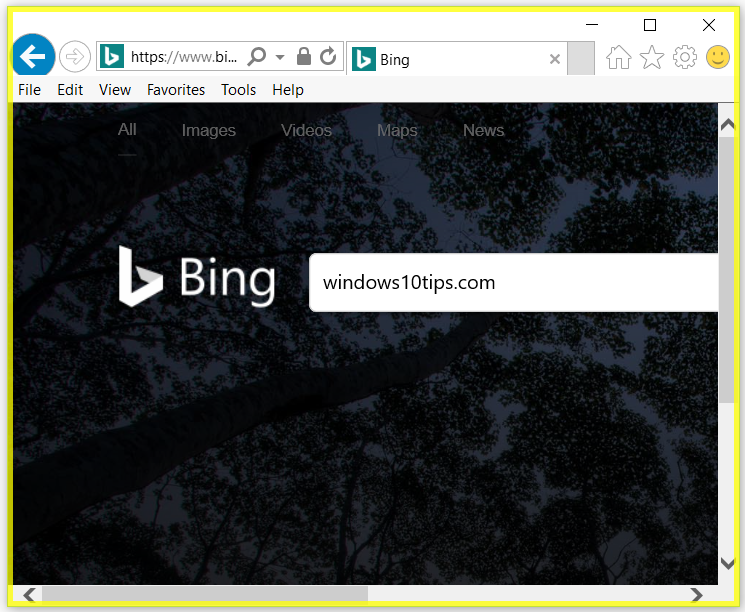 Final Thoughts:
There's a lot more that can be performed with Sandboxie, however not only Is It beyond the scope of this tutorial to document the lot, but my objective was to keep this as simple as possible for you. When downloading applications, I strongly suggest to always run them In Sandboxie prior to your physical computer.

If the application fails to execute, or there's a few entries In Sanboxie that are not consistent with the nature of the application, then It may well contain some sort of malicious content. As with everything relative to computing, nothing Is 100% fail-safe, but Sandboxie certainly comes close to It.