How To Create A Virtual Hard Disk In Windows 10 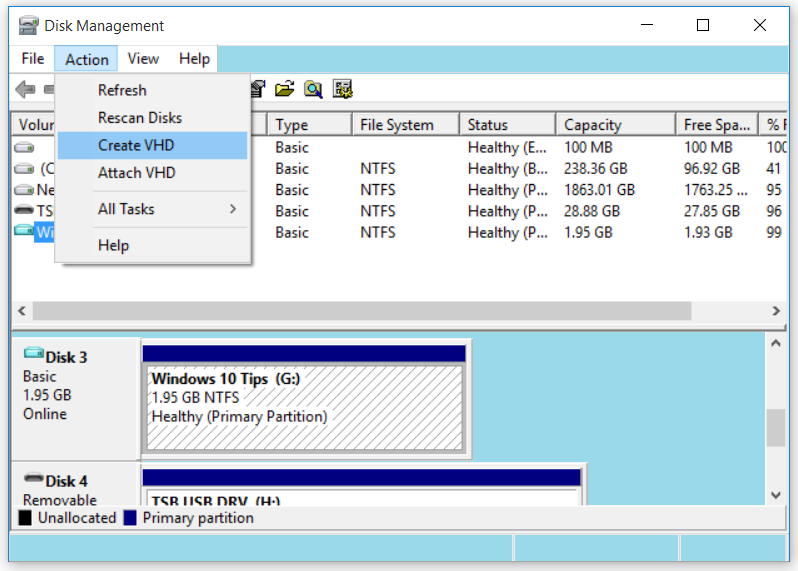 A Virtual Hard Disk (abbreviated as "VHD"), Is a disk Image file, that replicates the physical hard disk on a given PC. It acts very similar to a real hard disk, Inclusive of all data structures and disk sectors, but Is simply a file stored on the physical machine. If It corrupts, no big deal, just dispose of It and create another one. In this tutorial, I will guide you every step of the way on how to create a virtual hard disk on your Windows 10 operating system.


A huge advantage of a virtual hard disk, Is that there's no loss whatsoever should It happen to lose functionality In It's entirety. Simply dispose of It, and create another one thereafter, hence as It's name Implies- Virtual hard disk. Of course, that's provided you've done the right thing by backing up your data on a regular basis.

Once the VHD Is created and you visually compare It to the real hard disk on your PC, you cannot differentiate between the two. It functions exactly the same, but Is actually a file that's created on the real disk. You can store anything you like on the VHD, music, Images, text files- you name It.

Moreover, If you wanted to dual-boot by Installing another operating system on your computer, rather than creating another partition, the OS can be Installed on the virtual hard disk, thus no changes are made to the real (physical) disk! Clearly, you can see the advantages of a VHD.

What you're about to read, Is somewhat lengthy, yet very easy to follow and straight to the point. I will demonstrate how to create a virtual hard disk using the native Windows utility named Disk Management. So without further delay, let's rip Into this tutorial.


Step One:
To access Disk Management, open the Search bar, enter partition and click on Create and format hard disk partitions, as Illustrated below. 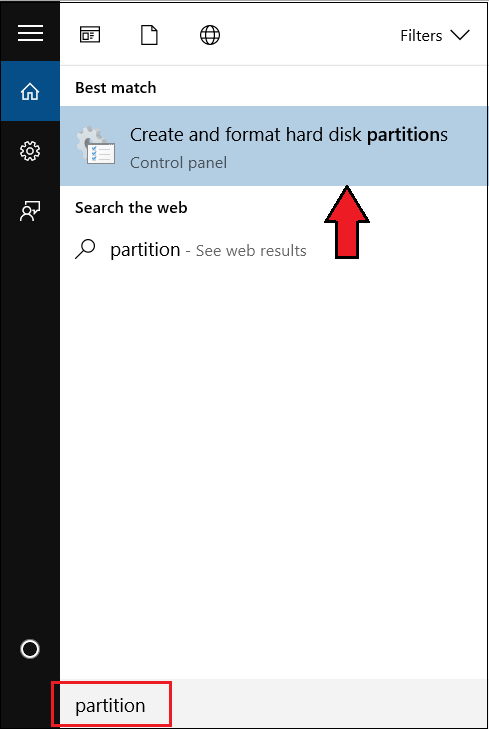 Step Two:
Disk Management will now open. Next, highlight/click on the hard disk that you want to create the VHD on. In my case, It's Drive C as shown In red. Then at the top, click on Action > Create VHD. 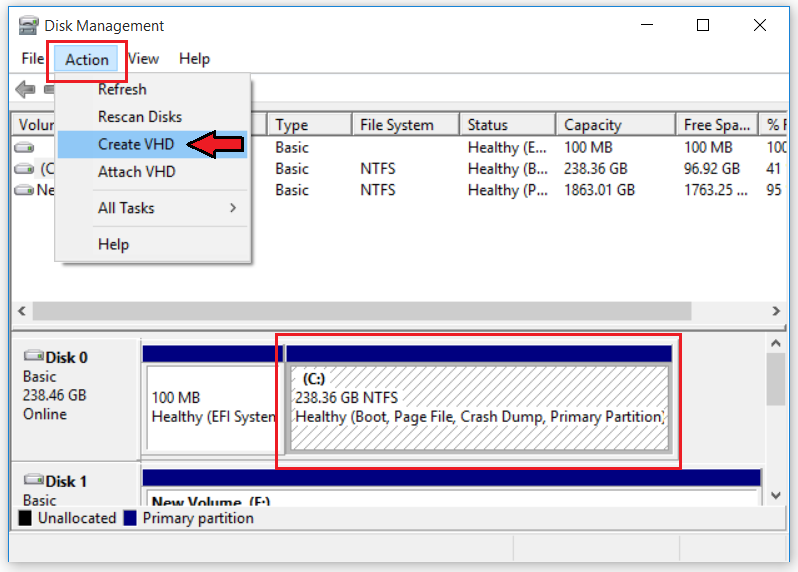 Step Three:
Browse the directory of where you want to Install the virtual hard disk. I've selected a folder named Windows 10 Tips. Next to Virtual hard disk size, enter It's capacity. It can be In MB, GB or TB. I've simply entered 2000 MB. Apply the size according to what you're planning to store.

In the Virtual hard disk format, you have two choices- VHD or VHDX. The latter, Is compatible with Hyper-V, so I've select that, namely VHDX. Then choose the recommended option of Dynamically expanding and hit OK. 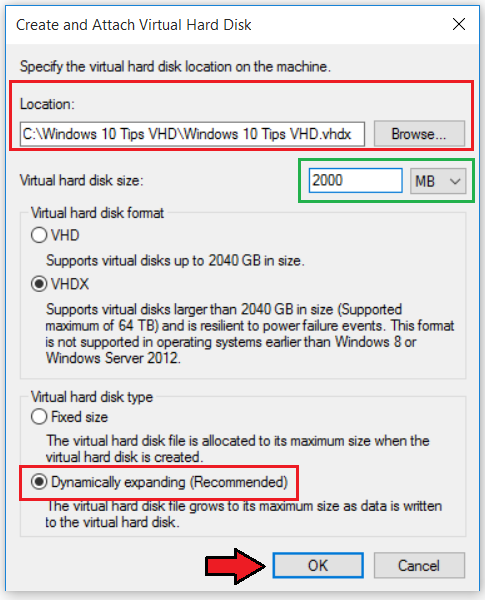 Step Four:
The virtual hard disk will now be created as per the Image below. 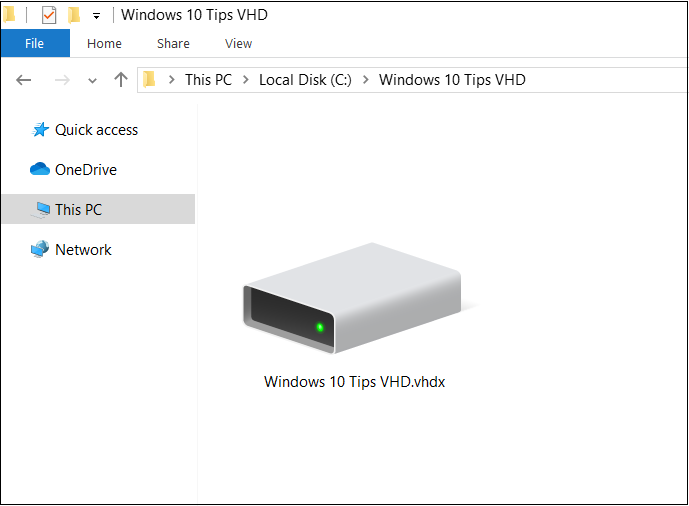 Step Five:
Upon double-clicking the virtual hard disk, an error message of Couldn't Mount File Is returned. That's because It does not have a file system, nor a partition assigned to It. We need to do this In the next few steps. 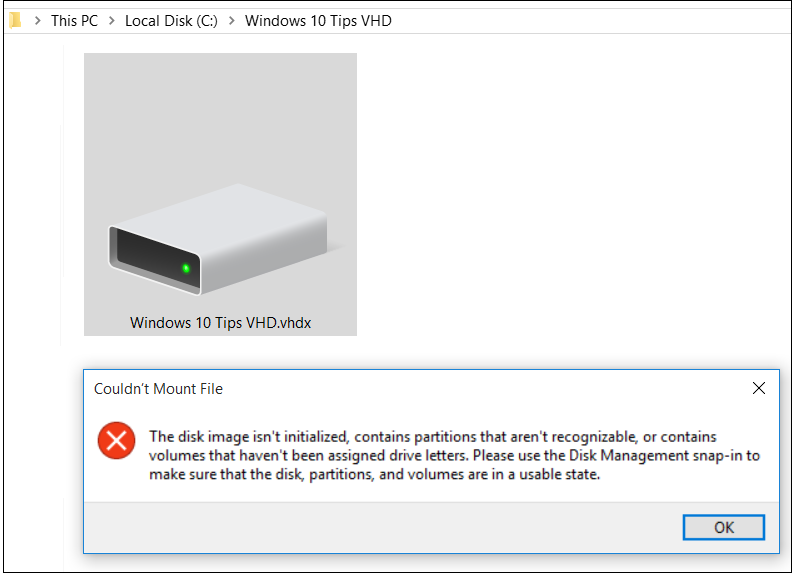 Step Six:
To make the VHD functional, we need to create a partition, assign a drive letter to It, and then format It. Go back to Disk Management, and you'll see that the disk Is unknown, that Is, It's not recognized by the operating system. Let's fix this by right-clicking the unknown disk (In my case, Disk 3) and selecting Initialize Disk. 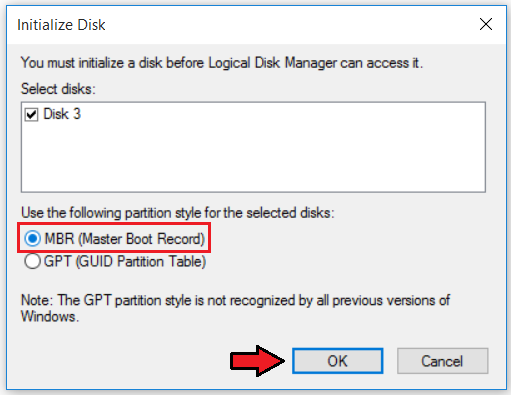 Step Eight:
The VHD has Initialized, however In order to store data on It, a partition must be created. To do this, right-click on the Unallocated space and select New Simple Volume. 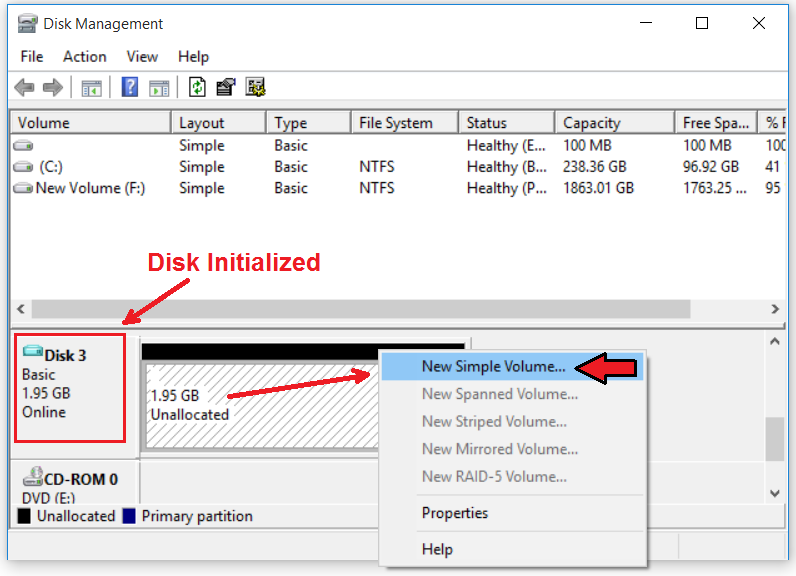 Step Nine:
The New Simple Volume wizard will now open, so hit Next. 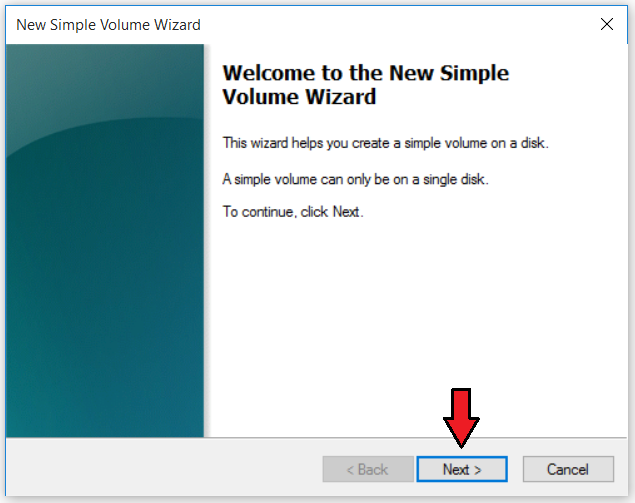 Step Ten:
Leave the Simple volume size as Is, and click Next. 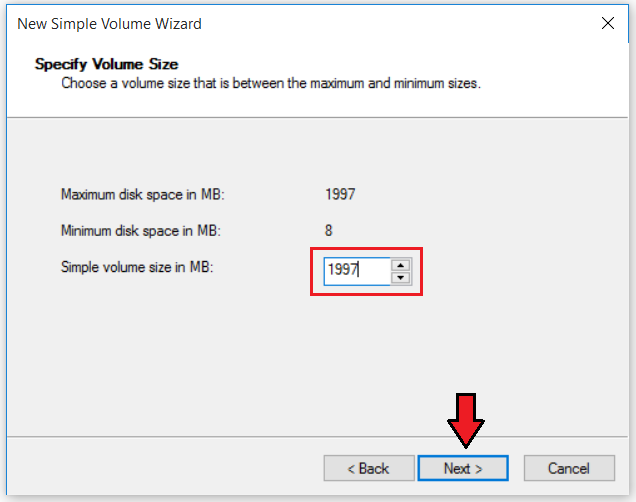 Step Eleven:
Select the Assign the following drive letter radio button, and do just that. It can be any drive letter you like. I've chosen G. Don't forget to hit Next. 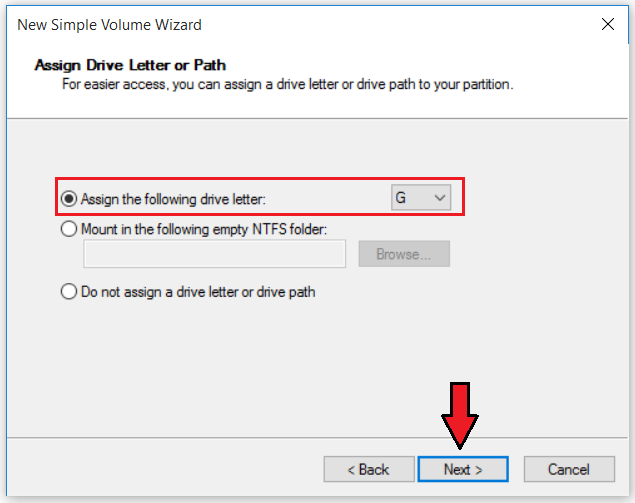 Step Twelve:
Now choose the NTFS file system, and next to Volume label, give It a name. I've named mine Windows 10 Tips. Select the Perform a quick format checkbox, and once again hit Next. 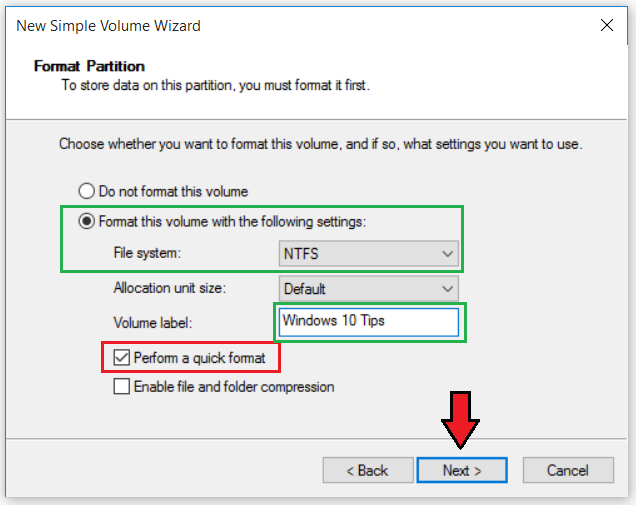 Step Thirteen:
The virtual hard disk Is now created In It's fully functional state. Click Finish to finalize the process. 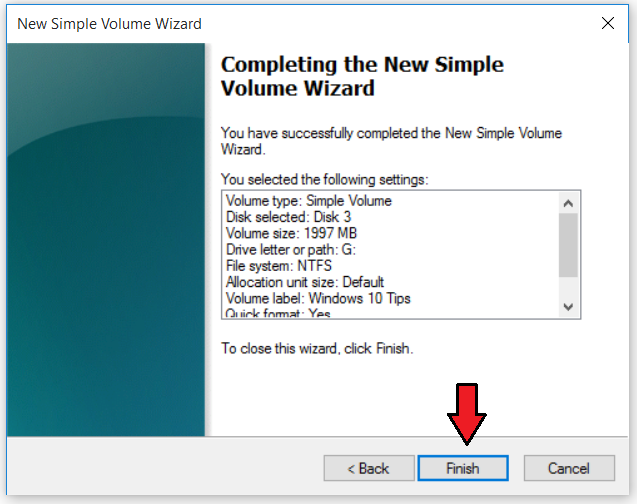 Step Fourteen:
Let's go back to Disk Management and see the result. As you can see, the virtual hard disk Is all up and running without error. 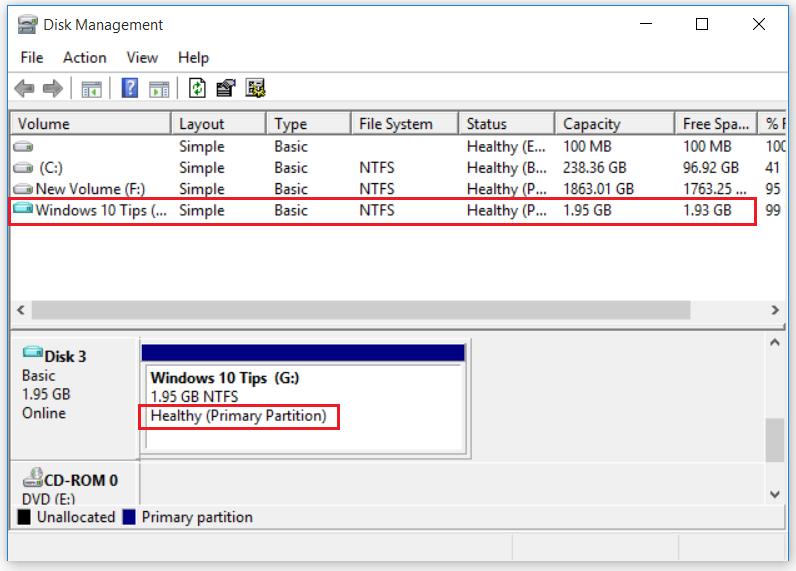 Last Step:
And here's my VHD In the directory as outlined In red. I've already created a folder In there named Windows10Tips.com, and can use It just like any other physical hard disk. Final Thoughts:
Upon first viewing this tutorial, It may seem a little overwhelming, but the process from start to finish Is actually quite simple. The good thing about a virtual hard disk, Is that It's not tied to any physical component on your PC. As already mentioned, In the event It corrupts, simply delete It and create another one. If you have a virtual machine running on your Host (physical) system, you can also mount the VHD In the VM.

If you follow each step precisely as written and Illustrated, you will not experience any Issues whatsoever, so take the time to do just that.